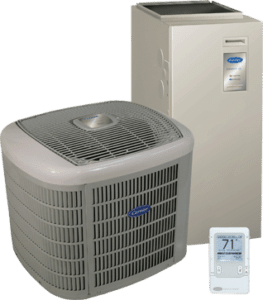 A forced air furnace is among the most common HVAC systems in the United States, performing well in both colder northern climates and more moderate southern areas like the Gulf Coast. They are less expensive than alternative heating systems, installation is simple, and because they already use ductwork to carry warmed air throughout the house, an air conditioning unit can be easily added.

How Does It Work?

A forced air furnace consists of:

Although the technology behind the forced air furnace has been around since the mid-1930s, it stands the test of time, which is why it remains the most popular choice.

A forced air furnace can quickly heat your entire home, and because it is centrally controlled with a thermostat, it keeps a relatively even temperature throughout. If maintained properly (to include well-insulated ductwork and sealing of air leaks), it is very energy efficient. The air filter can keep the room air clean and free of airborne contaminants, so a separate filtration system is not needed.

There are certain features of a forced air furnace that can be problematic. The rush of air flowing through the system can be noisy for some and depending on where vents are placed, drafts or cool spots can occur. Routine maintenance is required on the heat source, filters need replaced regularly and, as mentioned above, the duct system should be checked regularly.

When it’s time for a furnace upgrade, the professionals at Gulf Coast Air Systems can help you decide if a forced air furnace is the right system for your home. We have served Tampa Bay and neighboring areas since 1981.